The best way to see the site is to follow the pavement down from the entrance to the housing development, and stand facing 300 years of history.

Centre stage is the furnace stack where the iron was made. Iron ore, fuel and flux were poured in at the top in carefully controlled proportions. In the early years barrow-fulls would have been wheeled up a ramp from the hillside behind, but in 1855 a water powered lift was installed to make working life a bit easier. At the bottom of the stack you can see the latest and largest hearth that was installed only three years before closure.

Behind the wall to the left of the stack is the waterwheel pit, which was the first source of power used to create a blast of air to the hearth. The bellows – iron cylinders replaced leather in 1818 – were located between the wheel and the stack.

On the platform above the wheel pit are the remains of the hot air ovens which used the hot gases coming out of the top of the furnace to warm the fresh air being pumped into its base.

The building on your left housed the steam powered blowing engine that came into use in 1921. The steam was produced in boilers to the rear of the building, one of which remains (roughly) in place. Also inside were pumps for cooling water and compressed air, powered by electricity – the latest source of power. The electricity was generated on site by water-powered turbines. There would have been a maze of pipes in this area linking the buildings when the furnace was in operation.

To the right of the stack stood another (cupola type) furnace installed to maintain production of cold-blast iron, mostly using scrap iron loaded from the platform above. A photo of 1959 shows chimneys everywhere – there was another cupola furnace to the left of the engine house.

Further along to the right is the site of the original furnace of 1711/12, replaced by the one you can see now in 1770. Away to the far right is a building which was the forge that was the first iron-working structure on the site. More recently it was used to house the turbines powered by water taken off the river at a weir a little upstream. It was water from that weir that also flowed along to the wheels that powered the blast for the furnaces.

Behind the stack you can just see the barns on the hillside above that were stores for the materials used to make iron, delivered by rail after 1869.

Where you are standing was the casting floor, and the whole area behind you now covered by housing was a storage area for different grades of iron bars and waste materials.

If you can, join us for a guided tour, which includes a look inside the engine house and waterwheel pit, and a closer look at the hearth. 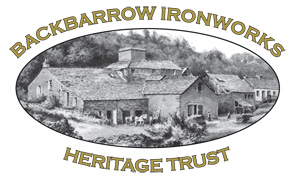